Abilene, Texas is regularly listed as one of America’s most livable small towns. Sitting about 180 miles from the Dallas/Fort Worth metropolitan area and with a population of 125,182, Abilene is considered the economic center of 22 counties in West Texas. According to their official tourism website, Abilene is “big on what matters” including history, culture, and hospitality.

The United States Air Force also calls Abilene home with the Dyess Air Force Base on the southern edge of town. Dyess is home to the Air Force’s B-1B, C-130, and T-38 planes. The 7th Bomb Wing on the base maintains operations of the B-1B aircraft and conducts training for personnel to fly those planes. In all, over 4,500 military personnel are assigned to Dyess with 491 civilian employees also employed there.

Dyess is also known as being one of the greenest bases in the United States Air Force. It has the distinction of being the first Department of Defense operation to use renewable energy and now uses both wind and biomass energy as power sources.

Known as one of the greenest Air Force bases, it only makes sense that Green Insight was brought in to consult on one of their building projects: A temporary lodging facility. This project consisted of 16 units in 2 different buildings. This facility would serve as temporary lodging for service members seeking permanent housing on or off base, on a special trip to secure housing, or for those awaiting the shipment of their household goods.

As part of the project, we worked with the United States Air Force and Tejas Premier Building Contractor to help Dyess keep its reputation as a green Air Force base. This included working with all parties on

One of the biggest challenges this project faced was the passage of time between plans being made and actual construction. Plans had been made 3 years before any work commenced and were no longer compliant with the updated LEED for Homes certification requirements.

Like most projects, the Dyess Temporary Lodging Facility also had a fixed budget. But unlike other projects, it would literally take an act of Congress to expand the budget, a long and arduous process.

Finally, the contractor chosen for the job by the United States Air Force didn’t have LEED for Homes project experience. They were also hampered by the requirements of highly specialized equipment including blast-proof windows.

Because of our longstanding relationship with the United States Green Building Council, we were able to work with them when it came to the outdated plans for the project. We were able to negotiate that the project would be registered under the LEED for Homes requirements for which it was designed.

We then worked closely with the contractor in all aspects of this project, especially in getting them caught up on the LEED requirements they were not familiar with. While most of these requirements are right in the plans, many are not, and rely on a contractor’s knowledge of the LEED for Homes certification process.

During the construction process, we ran into several periods where deficiencies were found and needed to be corrected. This, of course, came down to budget. Unfortunately, due to the nature of the contract, anything that ran over budget would come out of the contractor’s pocket. We were able to work with the contractor on finding cost-effective solutions.

At the end of the project, the Dyess Temporary Lodging Facility was able to certify under the old LEED for Homes requirements, and the contractor maintained its profit due to cost-effective solutions.

In all, the project was awarded LEED for Homes Silver certification, and the Dyess Air Force Base was able to maintain its reputation as being committed to green initiatives.

Learn how Green Insight can find a cost-effective and stress-free path for your green building project.

Contact us today. We’ll discuss your project and goals and show you how we can help you attain green building success! Let’s start the process. 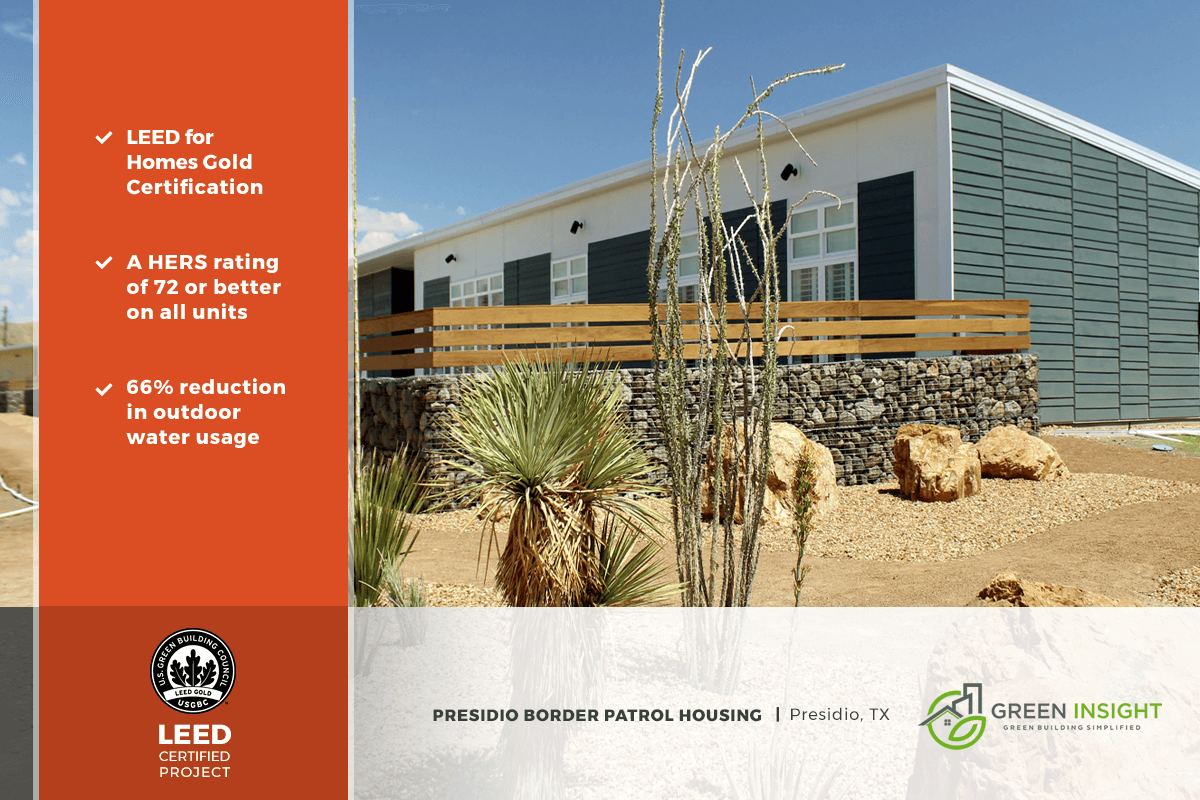 Presidio, Texas is a town steeped in history. Established in the 17th century but settled as early as 1500 B.C. Presidio is now home to just under 4,000 people.

This colorful and historic section of Texas lies right on the Rio Grande River, just across the border from Ojinaga, Mexico, and boasts some of the darkest skies in Texas making it a dream for stargazers. While along the river, it is considered desert land as part of the Chihuahuan Desert in West Texas.

Because of its proximity to the Mexican border, Customs and Border Protection (CBP) is a large employer in the area. However, due to the smallness of the town of Presidio, housing those border protection officers and their families is a challenge.

Green Insight was brought in to consult on ways to keep design and construction both green and functional on a solution to the housing shortage: a housing project funded by the federal government consisting of 26 single-family attached homes and one single-family detached home for U.S. Border Patrol employees.

Working with the U.S. Customs and Border Patrol design team and W.H. Pacific contractors, we were able to come up with unique solutions to their housing issues while keeping the project green and sustainable.

The biggest challenge facing the project was a logistical one. While it can boast the darkest skies and best star watching in West Texas, its remote location doesn’t help when it comes to coordinating all the moving parts of a building project.

Located 8 hours by car from our offices, coordinating the construction team with our consulting duties required substantial planning to keep the project on schedule and within budget.

Additionally, the arid desert climate posed its fair share of challenges. Part of our work together was ensuring interior comfort and adequate yet responsible water usage.

To properly coordinate schedules with all parties, strong communication was an absolute must. That meant clear communication prior to our site visits to give crews ample time to make sure everything was ready for all inspections along the way and that all-important final inspection. We also needed to coordinate efforts to ensure all units were complete and ready for final testing.

Our meticulous attention to coordinating all parties paid off. Green Insight was able to successfully certify all 27 homes with a higher status than their original goal of Silver certification.

To combat the environmental challenges, the project utilized a stout building envelope with roof assembly insulation over R40 and walls of R22. These factors help ensure both occupant comfort in the units as well as energy efficiency.

Contractors were also able to strategically plan their planting choices to create landscaping that was both suited for the dry desert heat and didn’t require a lot of water usage.

After completion, the Presidio housing development became a model in sustainability as a piece of the 27 acre site that features both housing and landscaped common spaces.

Looking for a stress-free path to your green building project? The Green Insight team will help you find the best solution.

Get in touch with us today. We’ll discuss your project and goals while showing you how we can help you achieve green building success!